Your cart
Home / In the Studio / All About Birthstones - April 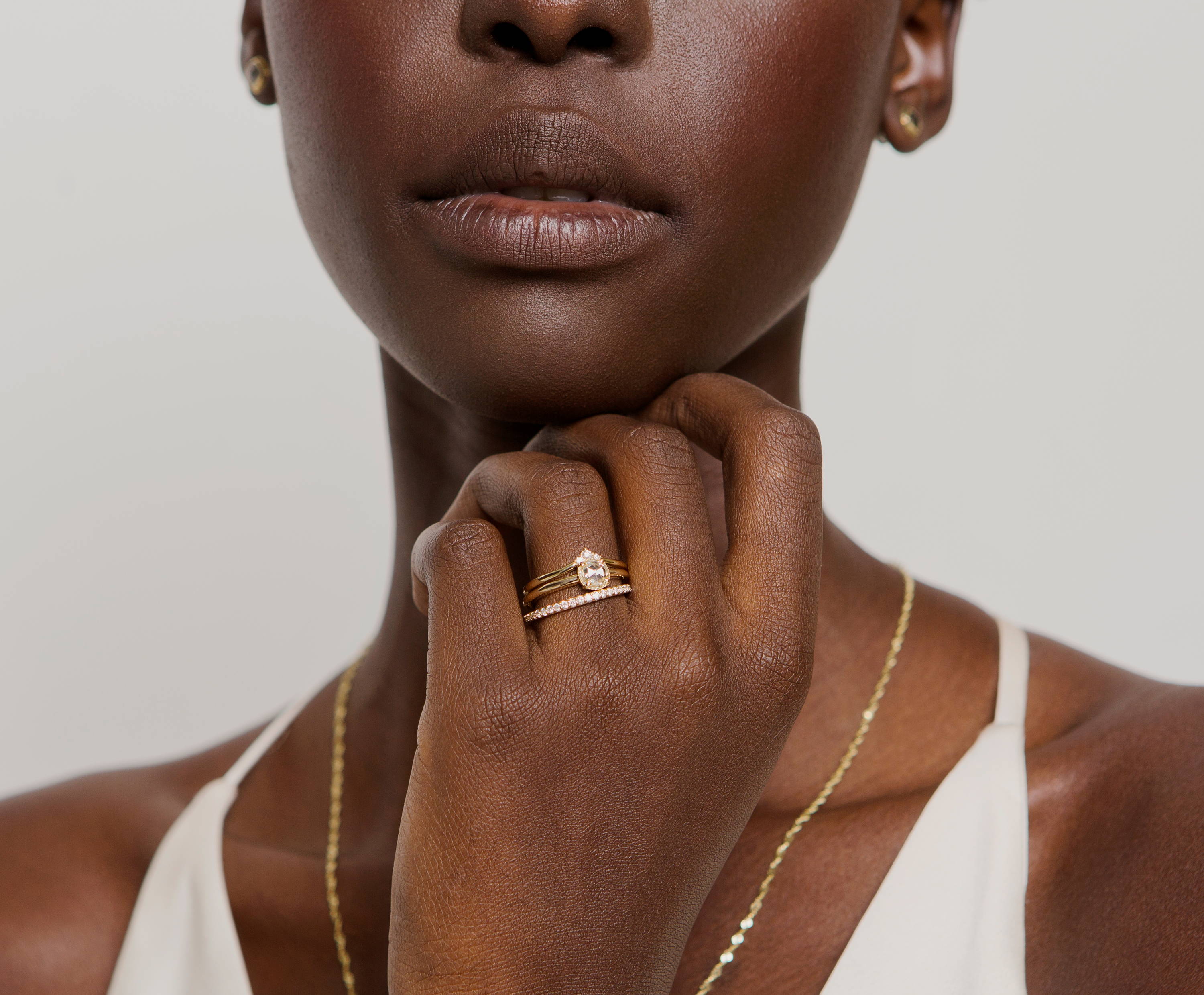 The birthstone for the month of April is the ever-popular and richly storied diamond! This gemstone has inspired and bewitched people for thousands of years. Even in their raw crystal form, diamonds boast unique optical qualities and amazing physical properties that have made this mineral one of the most prized and practical in the world. There are so many things we could discuss about diamonds – their unparalleled luster, unique industrial uses, durability and beauty are just a few. For the purposes of this article we’ll focus on a couple of interesting things that help us understand and celebrate this fascinating mineral.

The first diamonds were discovered in India in alluvial deposits (in gravelly stream and river beds), and quickly became a coveted gemstone among royalty and nobility. Imagine discovering these glittering, geometric diamonds in the rough, casually waiting in the shallows of a local stream! Although they are sometimes found at the surface like this, diamonds actually form deep within the Earth. Hidden in the planet’s mantle, magma rich with a cocktail of minerals and raw elements is subjected to intense heat and pressure. Diamonds are a result of carbon, “recycled from the ocean crust by plate tectonics – the carbon of microorganisms” – that crystallizes as a result of this extreme environment.

Diamonds rise up through the Earth’s crust to the surface via volcanic activity, resulting in “pipes” of hardened kimberlite and lamproite. These were first discovered in the late 1800s in South Africa, and since then this type of deposit has become the primary source of diamond mining. Similar large-scale deposits have been found in South America (namely, Brazil) as well as in Australia and Russia. Alluvial (river) deposits are considered the secondary source of diamond mining; they are a result of weathering and erosion loosening the diamond crystals from their hardened host material, and eventually washing up in rivers and stream beds.

The carbon in diamonds comes from eons’ worth of life forms that have returned to their basic carbon constitutions and been recycled into something new and precious. “Salt and Pepper” diamonds, which contain larger, dark carbon inclusions, allow us to more clearly visualize the crystal’s unique formation from carbon. Included diamonds like these have increased in popularity over the last ten years, as they are visibly one-of-a-kind and distinct even among other diamonds.

Diamonds most often form in an octahedral crystal structure (imagine two four-sided pyramids with their bottom faces connected). This raw crystal shape is what led to today’s modern diamond cuts, which are designed to showcase the unique optical qualities of the diamond crystal. The process of cutting a gemstone is always intended to enhance it by bringing out its best qualities and make it suitable for use in jewelry. If it results in too much loss of the precious diamond crystal, the value of the stone may be diminished, so lapidaries often only minimally cut and polish a diamond crystal’s surface.

If you imagine the octahedral shape described above and lop off the top third of the top pyramid, you begin to see the familiar shape of a cut diamond. During faceting (a process of cutting flat, reflective planes onto a gemstone), this top surface becomes the table of the stone. The remaining bit of the top pyramid eventually becomes the crown, and the part where the two pyramids meet is shaped into the cut stone’s girdle. The bottom pyramid is faceted into the stone’s pavilion, which is cut to reflect light from the inside of the stone and back out through the table and crown of the stone. This is why this popular cut of diamond has become known as the round brilliant cut, so named because it maximizes the stone’s ability to shine brilliantly.

Diamond has historically been regarded as bringing luck and protection, and also is said to represent purity, faithfulness, and constancy. Because of their physical durability it is also symbolic of endurance and longevity. It’s no wonder the diamond has long been associated with marriage and commitment!

Whether you love diamond for its incredible sparkle and shine, for its story of endurance and strength through harsh environments, or for its symbolism of love and loyalty, this gemstone is one of the most enduring and emblematic of all time.