Your cart
Home / In the Studio / Let's Learn About Dendritic Agate 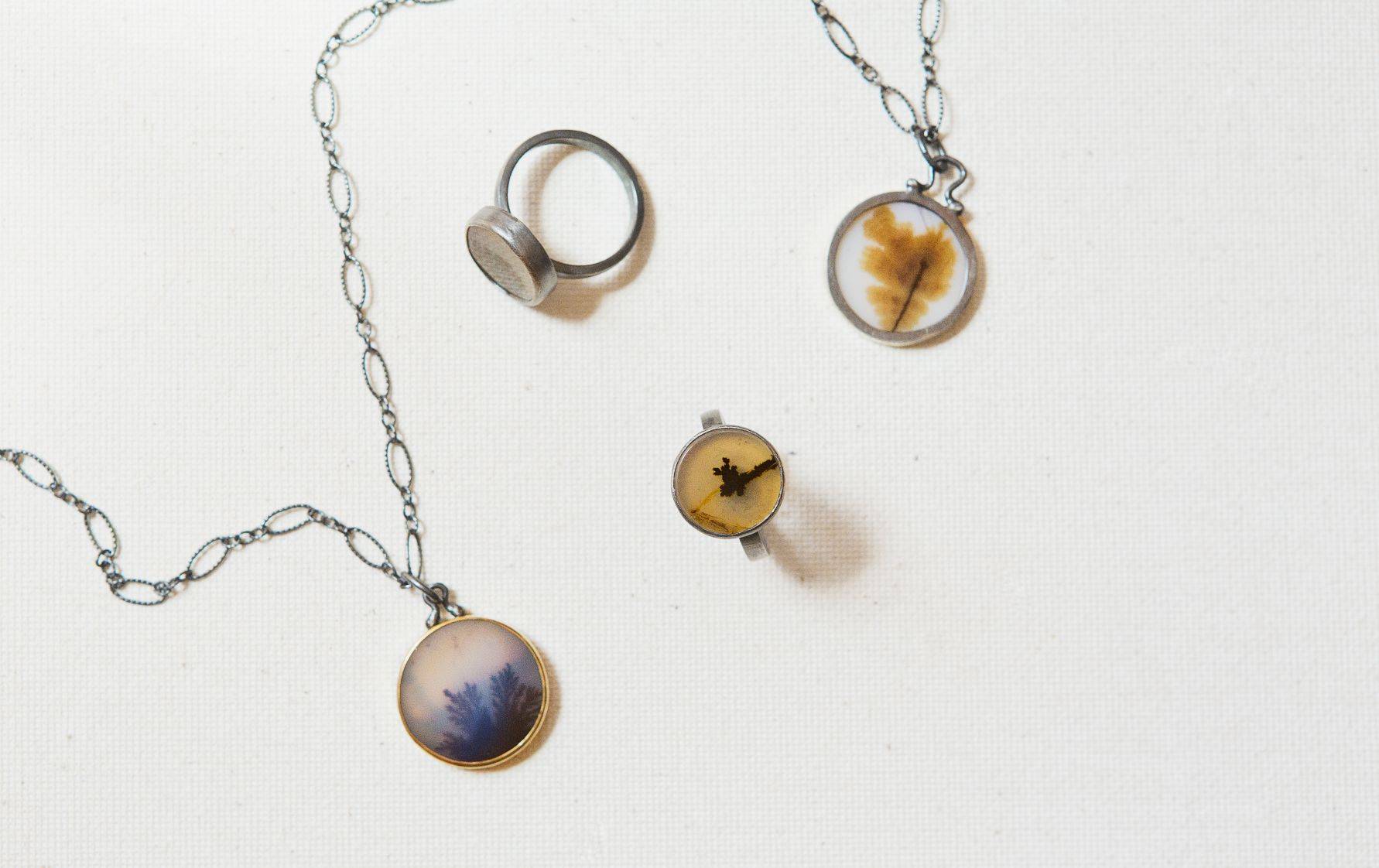 Have you ever noticed that the patterns in nature repeat themselves? From tree branches to the way cracks form in the ground, to the web of our own human cardiovascular system, nature finds ways to build upon itself in intricate, regular arrangements called fractal patterns. These can be on a large scale, like the branches of trees, or infinitesimally small, like snowflakes. The definition of a fractal pattern is that, if its large scale pattern is examined at a much smaller level, it looks exactly the same. If you’ve ever looked at veins in a leaf, you can see that the pattern they make is not too different from the branches of the tree that the leaf came from.

Another amazing display of fractal patterns are those that appear as dendrites (Greek, meaning “tree-like”) in rocks and minerals. Appearing as tiny, whimsical landscapes, gemstones displaying dendritic inclusions give us a truly fascinating peek into the science of mineralogy and a glimpse at how nature likes to create these patterns.

So how do dendrites, these tiny tree-like images, wind up in our gemstones? When water rich in manganese and iron oxides flows through fissures and cracks in rocks or minerals, these metallic elements are sometimes deposited within the crystal structures they encounter. This often occurs along deep fissures, down a flat, narrow plane between rock layers, causing the dendritic forms to grow flat alongside the planes of rock in which the water flowed. Sometimes, as in quartz, the dendrites can seep into the three-dimensional crystal structure and develop into much more elaborate formations. When manganese or iron oxides are deposited within microcrystalline quartz, and under the right conditions, the result is what we call Dendritic Agate.

As water containing these oxides enters the crystal’s structure (known as the “crystal lattice”), the particles of black or brown manganese or iron are left behind. Over millions of years and cooling conditions, the tiny particles that were deposited into the host material solidify, crystallizing into a branch-like imprint. This is very similar to the way that snowflakes form; when liquid water is cooled, it forms into dendritic patterns as the water molecules freeze and crystallize, growing upon each other in intricate and beautiful forms.

Interestingly, the term Agate used in reference to these dendrite-containing quartzes is actually a misnomer. Generally speaking, Agate is the microcrystalline (cryptocrystalline) form of quartz, but more specifically refers to those specimens that exhibit bands of alternating colors (usually black or brown and white or grey).

What we refer to as Dendritic Agates are actually Chalcedony, interspersed with dark black or brown inclusions of manganese- or iron-oxides that form in tree-like patterns (not bands). Like Agate, Chalcedony is also a microcrystalline form of quartz. It consists of a “fibrous” crystalline structure, in which the crystals grow in parallel planes at a microscopic level. These usually appear as milky, translucent, or slightly opaque and often are whitish-grey in color.

When dendritic inclusions end up in Chalcedony, the result is a beautiful combination of dark grey or black dendrites against a cloudy, diffuse background. This sometimes resembles trees on a landscape against a dusky sky -- when these are used in jewelry, it’s like wearing a little reminder of nature all around us.

How do Dendrites Form?