Your cart
Home / In the Studio / All About Birthstones - January 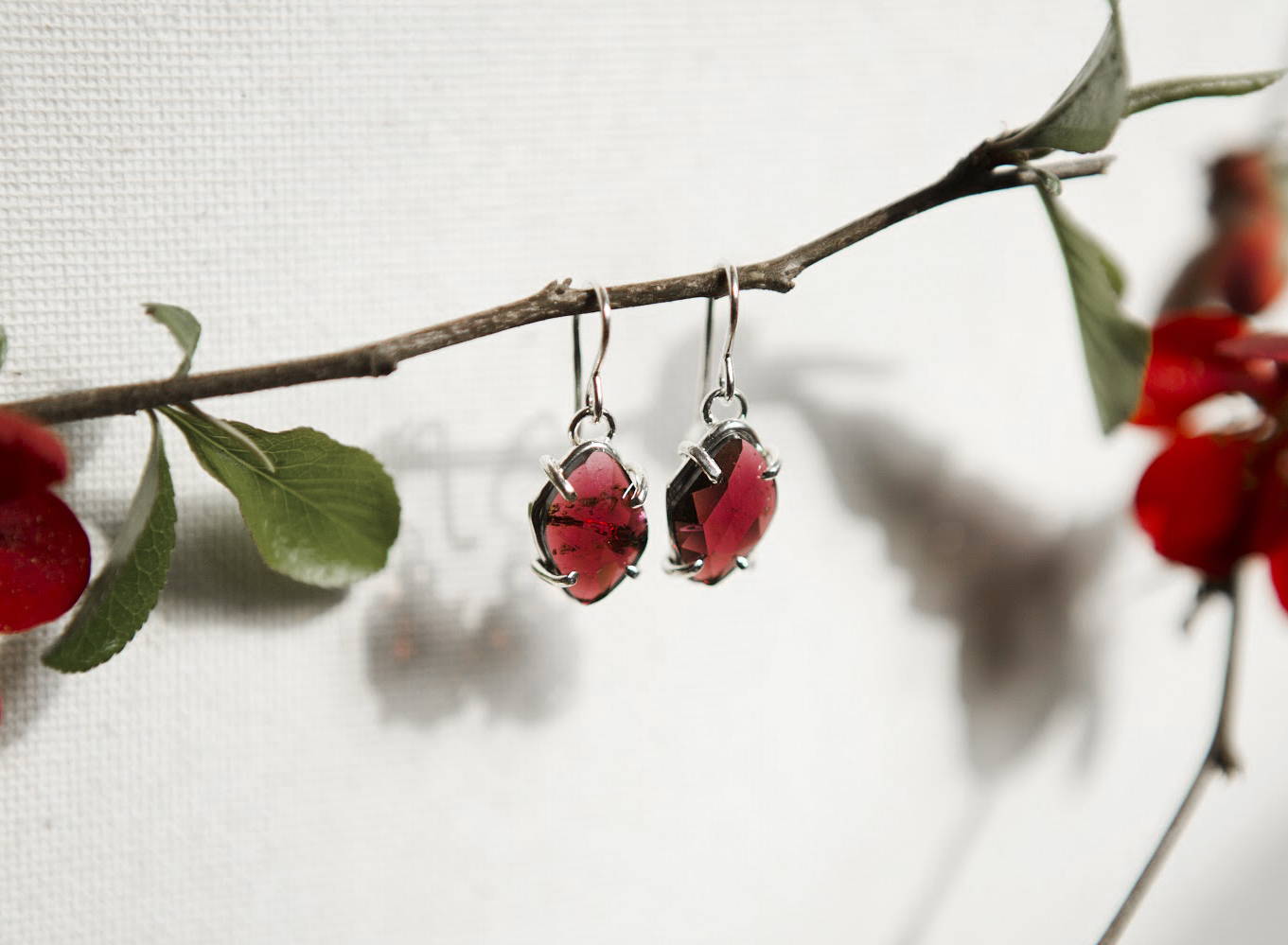 Happy New Year! The birthstone for January, Garnet, is one of the most varied and valued semiprecious gemstones. Garnet is actually the name of a mineral group, which consists of different species and further classified into varieties. The varieties in the Garnet group form in an array of colors, each with its own unique qualities and histories.

There are actually over twenty species of garnet, but only a handful are considered commercially important. According to the GIA, those most important species are pyrope, almandine (also called almandite), spessartine, grossular (grossularite), andradite, and uvavorite. As a note, in gemology, the nomenclature is very important in order to effectively describe what type of garnet is in question. The standard way to do this is to use the classifications in ascending order: [variety] [species] [group]. For example, one of the varieties called tsavorite is officially classified as “Tsavorite Grossularite Garnet;” the variety tsavorite belongs to the species grossularite, of the garnet group. This common understanding of how to describe gemstones helps gemologists to identify and assess them and share findings and information that helps them to understand the mineralogy behind them.

The varieties of the mineral species are a result of slight differences in chemical composition, reflected most readily in the gemstone’s color. Many of the garnet varieties are a purplish red color, but others can be orange or even green! The color is usually a good indicator of the garnet’s variety, and sometimes other internal characteristics can help us to identify them.

One of the most rare and valuable forms of green garnet, the demantoid variety (of the andradite species) sometimes exhibits a type of internal characteristic known as a “horsetail inclusion,” one of the few types of inclusions that can actually increase a gemstone’s value. Horsetail inclusions are formed of the mineral chrysotile and look like a golden-brown, wispy starburst. Interestingly, these inclusions only occur in demantoid garnets, and in fact are used diagnostically to identify them, and to determine their location of origin. Demantoid garnets have primarily been found in Russia, and for some time it was believed that horsetail inclusions were a surefire sign that the demantoid in question originated from Russia. More recently, it was discovered that some horsetail inclusion-bearing demantoids are also found in Italy and Iran. This variety is still extremely rare, though, so wherever they come from, demantoids are highly prized and even more coveted if they include the elusive horsetail. Who knew that a so-called “imperfection” would become so sought-after?

The more widely recognized red garnets, especially almandine garnets (the most common garnet species) have been popular throughout history and can be found in jewelry dating back as far as ancient Egypt. Its commercial availability increased with the discovery of a large deposit in central Europe in the 1500s, the now-famed Bohemian garnet deposits. In part thanks to the discovery of this valuable deposit, this part of Europe became the center of the regional jewelry industry. From then these gorgeous, deep red garnets have been used to adorn the crowns of royalty and the necklines of nobility, and they continue to be popular to this day.

It’s no surprise that these juicy-looking gems have been compared to the seeds of the pomegranate, and in fact the word garnet comes from the Latin word granatus meaning ‘seed’ or ‘grain,’ most likely a reference to the seeds of the pomegranate fruit. Its blood-red color fostered the belief that they represented inner fire and life force, and are considered symbols of love. They also symbolize friendship and are believed to have protective power during travel.

It’s appropriate that a gemstone resembling and symbolizing a seed should be the birthstone for the first month of the year; the garnet can serve as a reminder of the fresh start and opportunity for growth that comes with the New Year.