Your cart
Home / In the Studio / All About Birthstones - July 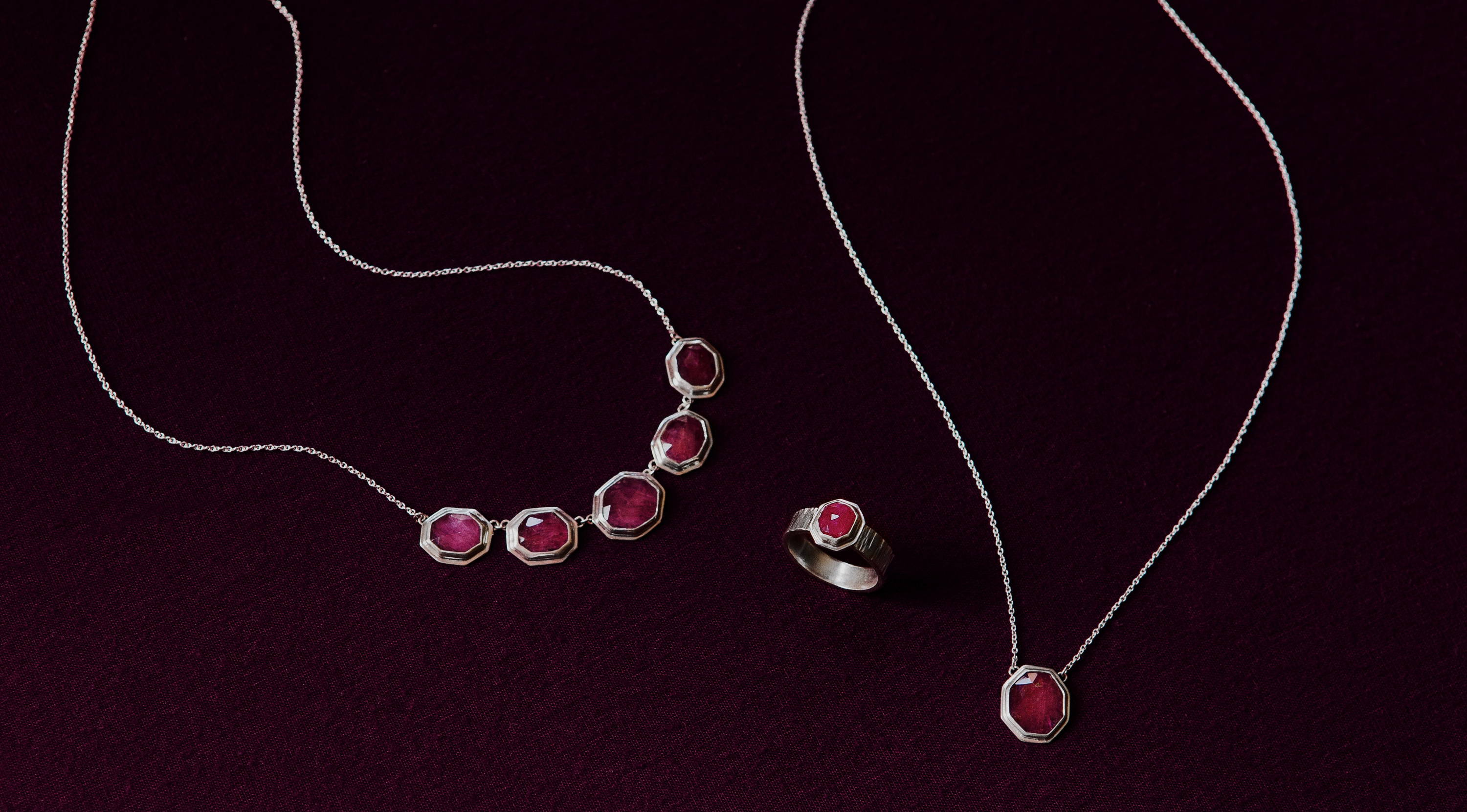 Rubies are one of the gemstones we’re perhaps most familiar with; its iconic color has inspired imagery in popular culture, and we often hear the term “ruby-red” in describing the most intense and saturated of red hues. But there is more to rubies than their red color--read on to learn more!

Ruby is a variety of the mineral species Corundum. Pure Corundum (an Aluminum Oxide) is actually colorless, and as is the case with most gemstones, its color comes from trace amounts of another element. Trace elements are so barely present in the mineral’s composition that they don’t even make it into the chemical formula, and yet in combination with other factors related to the growth environment, can have such an effect on the color of the gemstone that it can change the way we categorize them. Did you know, for example, that Rubies share their mineral species with another well-known gemstone, Sapphire? The only thing that separates them is the trace elements that are present in the Corundum, which affect the color and thus our identification of the gem.

Rubies are red because of the trace presence of the element Chromium (in the case of Sapphire Corundum, the coloring agent is Titanium). The host environment of the crystal also impacts its color profile; if the ruby crystals are growing in an iron-rich host material such as basalt, they have a darker and less intense color. The rubies that form in host material that contains hardly any iron, such as marble, are those that exhibit the unmistakable glowing red color that we see in high quality rubies. The geographical mining location dictates the type of host and gem material present, since the geological forces that form gemstones are different in different parts of the world.

Since the latter color and quality are considered more desirable for the gem and jewelry trades, the most famous deposits of rubies are those that have formed in marble. These are found mainly in Thailand, Myanmar, the Himalayas, and Vietnam. Other notable ruby deposits recently discovered are in Tanzania, Madagascar, and Mozambique. Natural rubies also have many inclusions and can exhibit a soft shimmer known as “silk,” which is due to the presence of the mineral Rutile.

Other than those found naturally, rubies are also sometimes synthesized in a laboratory. The most popular process of synthesizing rubies even to this day, the Verneuil process was invented in the 1800s and is considered the first successful synthetic crystallization process. The Verneuil method involves a process called flame-fusion, which consists of dropping powdered chemicals through a high-heat flame onto a rotating plate, producing a synthetic crystal.

Gemstone vendors are expected to disclose whether a ruby is synthetic, but sometimes this doesn’t happen, or there is a stone whose origin is unknown and needs to be tested. A gemologist can look at the gemstone under a microscope and determine whether it is synthetic by looking at the types of inclusions that are present. Flame-fusion produces characteristic inclusions that are usually only visible under a microscope, but to the naked eye will look like a gem with a high degree of clarity and color intensity (which would be very, very rarely found in nature). Unless you have a very rare and expensive gemstone, a perfectly clear, large, and saturated ruby is probably a synthetic.

Rubies have also carried many different types of symbolism throughout the centuries; in ancient times, warriors in Myanmar (one of the largest and oldest ruby deposit locations, then called Burma) would carry rubies and even find ways of putting them into the flesh to protect them in battle. Indian legend suggested that rubies would allow one to live in harmony with one’s enemies. In Medieval Europe, the gems were used to denote status, often worn by royalty and upper class individuals. They were also symbolic of passion and were said to bring success in romance.

With their huge variety of color, hue, saturation, and clarity, rubies give us an abundance of design opportunities for jewelry that celebrates them in all their forms. Take a look at our Ruby Collection to see some of the varieties of natural rubies that are just waiting to bring a burst of color to your day.