Your cart
Home / In the Studio / All About Birthstones - October 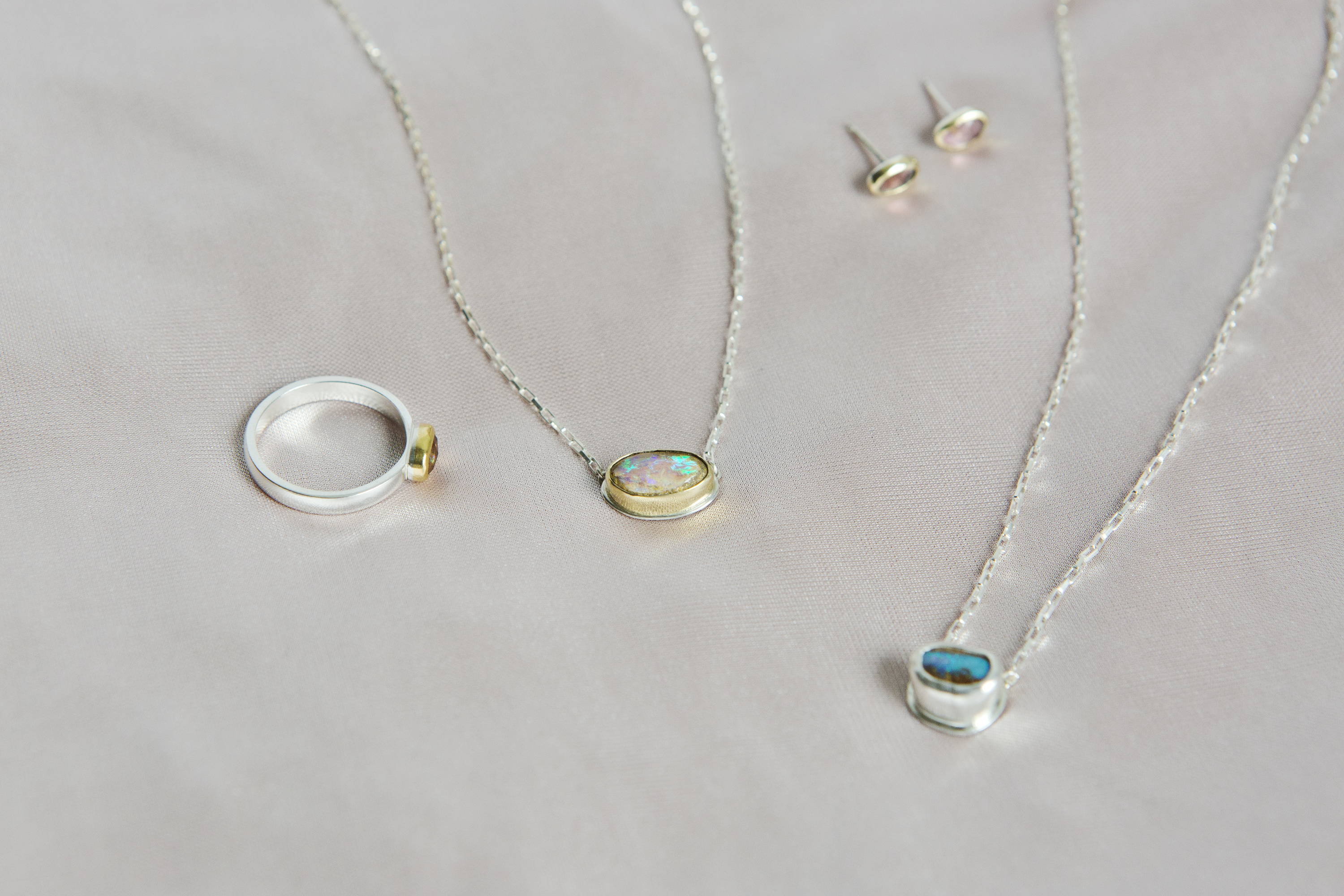 Opal, with its prismatic flashes and mysterious composition, and Tourmaline, in its many gorgeous hues, invite us to celebrate the variety and color of the Autumn season. The two October birthstones are equally beautiful and symbolic, but have very different stories and backgrounds--let’s explore these two amazing gems.

You wouldn’t think that a gem deposit found in desert-like environments would be formed from traces left behind by heavy rainfall, but Opal is just that magical. Climates with seasonal rainfall followed by drought provide the perfect environment for the forming of this gemstone. Rain brings with it microscopic particles of sphere-shaped silica (a compound of silicon and oxygen), which end up deposited deep within the ground. These particles end up wherever water flows during rainfall -- into cracks and fissures in loose earth as well as in existing rock formations. When the rainy season is over and the moisture evaporates, and is followed by a season of dryness, these silica particles become trapped within the host material (usually sandstone) and eventually crystallize into Opal. This unique growth environment is only found in certain geographies with the right combination of seasonal rainfall and drought; this explains why Opal is mainly sourced from Australia, where the outback plays host to the formation of this amazing gemstone.

Opal is classified as either precious opal or common opal, depending on the presence of an optical quality called “play-of-color.” In gemology, this term is used to describe prismatic flashes of color that can be seen in changes of light. The Gemological Institute of America (GIA) offers a great explanation of how this effect occurs in opal:

Play-of-color occurs in precious opal because it’s made up of sub-microscopic [silica] spheres stacked in a grid-like pattern—like layers of Ping-Pong balls in a box. As the lightwaves travel between the spheres, the waves diffract, or bend. As they bend, they break up into the colors of the rainbow, called spectral colors. Play-of-color is the result.

The colors seen in a precious opal’s play-of-color depend on the size of those silica spheres. Amazingly, these silica spheres are suspended in a gel-like substrate which also contains up to 20% water in its structure. This structure makes Opal one of the most sensitive gemstones; because of its water content and mineral structure, it is susceptible to excessive dryness or moisture and can easily crack and scratch if subjected to a hard surface. This is why many jewelers will advise you not to set an opal in a ring, where it would encounter the most wear-and-tear.

There are several different types of opals, differentiated mainly by translucency, pattern of play-of-color, and body color. Boulder opals like the ones in our October Birthstone collection are one of my favorites--they are unique in that the surrounding host material (sandstone) in which the opal seam is formed is included as part of the finished gemstone. This allows us to imagine the environment in which the opal is formed and includes the and makes my inner gemologist totally geek out.

Other than the fascinating geology behind these gems, Opals carry with them a few other interesting attributes. Many ancient cultures ascribed magical properties to these flashing, colorful stones; Opal has been regarded throughout history as one of the luckiest gemstones, and in some cultures said to bring prophecy and protection from disease. Long thought of as symbolic of love and hope, these beautiful and colorful gems are truly special in whatever form they occur.

Although Opal is the traditional birthstone for the month of October, Tourmaline is now also enjoyed as one of the month’s birthstones. Tourmaline forms in a number of colors; in fact, the word Tourmaline comes from the Sinhalese word for “mixed gems” because it occurs in so many different hues.

Because they occur in so many colors, people throughout history have confused them with other precious gemstones. It wasn’t until the field of modern mineralogy developed in the late 1800s that it was determined that there could be multiple colors of the same mineral. Since then, some of the most important and valuable colors of Tourmaline have earned their own specific trade names; Indicolite, for example, is the name for a particular shade of bright blue Tourmaline. Rubellite Tourmaline gets its trade name from the deep red color, and was historically often mistaken for Ruby. There are even some specimens of Tourmaline that display its trigonal crystal structure with an inner pink Tourmaline core surrounded by green Tourmaline -- aptly called Watermelon Tourmaline.

Most deposits of Tourmaline are in Brazil, but they have also been mined in Afghanistan, Pakistan, Kenya (as well as a few other countries in Africa), and even in the United States (California and Maine). Tourmaline crystals are found in pegmatites, which are underground rock formations that result from the last stage of magma crystallization. Depending on the type and quantity of trace elements present within the growth environment, the crystals will form in different colors.

Each color of Tourmaline carries a different symbolism; Black Tourmaline is said to be protective and confidence-boosting, while Green Tourmaline promotes courage and strength. Pink Tourmaline is believed to embody love and compassion. With all its colors and metaphysical attributes, there is bound to be a Tourmaline for everyone!

Whether you’re an October baby or not, Opals and Tourmalines offer an array of gem qualities, colors, and forms that appeal to our whimsy and celebrate the incredible natural forces that bring these gems into our lives.